Current claims-based attribution methodologies require ACOs to make certain tradeoffs. Prospective attribution has the advantage of timeliness while retrospective attribution has the advantage of precise overlap between assigned beneficiaries and beneficiaries receiving primary care services from the ACO during the performance year. The NAACOS Cost and Quality Data Warehouse, containing the comprehensive Medicare fee-for-service (FFS) claims dataset from 2013 through 2015, was used to quantitatively investigate differences in key metrics that impact ACO performance for 322 Medicare Shared Savings Program (MSSP) ACOs. This is the first study to simulate the prospectively and retrospectively assigned beneficiary populations for actual ACOs. Key metrics were evaluated for each of the 322 ACOs during the 2015 performance year. Despite significant differences between prospective and retrospective assignment, neither methodology shows performance bias.

Of those studied, the average ACO would have experienced only 71 percent overlap between the prospectively assigned and retrospectively assigned populations. Both the prospective and retrospective assignment methodologies demonstrate significant mismatch between intervenable and attributed populations. This suggests that more focus should be placed on non-claims-based methods of attribution, such as voluntary alignment, to achieve sustained success under the MSSP. Table 1 below shows decision factors to weigh to help ACOs choose assignment methodology.

Table 1: High-level Factors to Consider Between Prospective and Retrospective Assignment 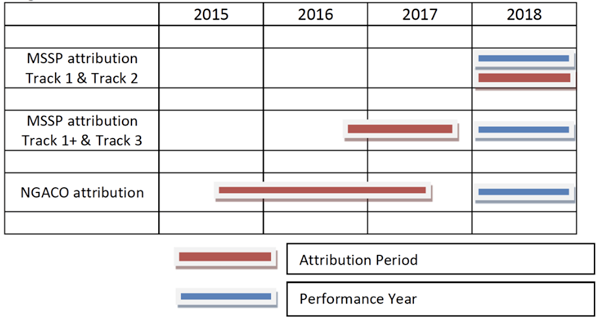 The purpose of this NAACOS study and resource is to further quantify the aforementioned qualitative differences between prospective and retrospective assignment ACOs to better inform ACO track selection. This is the first study to recalculate attribution under prospective and retrospective assignment over the same time period for actual ACOs. The quantitative metrics concerned include assigned beneficiary count, assigned beneficiary overlap, risk score, PBPY medical expenditures, risk-adjusted PBPY medical expenditures, and annual death rate.

The study used the NAACOS Cost and Quality Data Warehouse which contains 100 percent of ACO assigned beneficiaries in addition to 80 percent of those eligible for assignment, but not assigned from 2011 to 2015. Data elements include all institutional and provider bills for those included in the sample. The assigned beneficiary count, assigned beneficiary overlap, risk score and PBPY medical expenditures were studied for the 2015 performance year, during which 392 ACOs participated in the program. Four ACOs were eliminated from this study because they did not have complete data in the NAACOS Data Warehouse.

Furthermore, validation checks were used to compare actual retrospective assigned beneficiary counts from the MSSP 2015 ACO public use file (PUF) with calculated retrospective assigned beneficiary counts and PBPY medical expenditures. This resulted in the exclusion of an additional 66 ACOs that exceeded a 20 percent validation threshold. Variances between the NACOS Data Warehouse and PUF could have been caused by substance abuse claims contained within the PUF and not the NACOS Data Warehouse, large claims included in the NAACOS Data Warehouse but not the PUF, or provider participant list changes from 2013 through 2015. The final sample includes 322 ACOs.

ACOs frequently change provider participant composition between performance years. Changes in provider participants from the study period October 1, 2013 through December 31, 2015 were handled by only considering the provider tax identification numbers (TINs) that were continuous participants during the entire study period. This methodology allows individual providers to change participation within the study period and is consistent with CMS policy. This caused discrepancies between the PUF and the NAACOS Data Warehouse because the PUF includes all participant TINs as they are added or removed throughout the 2013, 2014 and 2015 performance years.

There was not a consistent pattern between the average HCC risk score of the prospectively and retrospectively assigned populations. Nearly half of the time the risk score would be lower, and the other half it would be higher under prospective assignment consistent with random churn of assigned beneficiary population. Note that the raw risk score was used for this study since the renormalization factor cancels for the same ACO.

There is no one-size-fits-all claims-based attribution approach that is optimal for every ACO. This suggests that ACOs should have the flexibility to choose the attribution approach that fits their local market dynamics, available resources and patient population independent of which ACO model or track is selected. NAACOS has repeatedly advocated for the choice of assignment methodology, regardless of the specific model or track in which an ACO participates. CMS should also exclude beneficiaries who move from the ACO’s extended service area from assignment, a policy which applies to the Next Generation Model and should be added to MSSP and future Medicare ACO models.

Additionally, the quantitative evidence detailed in this study supports that neither claims-based attribution approach is ideal for all ACOs. However, neither attribution methodology puts an ACO at a general disadvantage from being able to achieve performance goals such as earning shared savings. As such, more emphasis should be placed on exploring improvements to the attribution methodology. For example, a successful implementation of a voluntary alignment process, has the potential to improve assignment as well as emphasize an ACO’s relationship with its beneficiaries and further engage them in their care and involvement in the ACO.

National Association of ACOs (NAACOS) member resource. The Impact of Retrospective Versus Prospective Attribution on Your ACO, https://naacos.memberclicks.net/the-impact-of-retrospective-versus-prospective-attribution-on-your-aco

Thank you for reaching out, you may expect a response the following business day.

If you prefer you may also  email us directly.